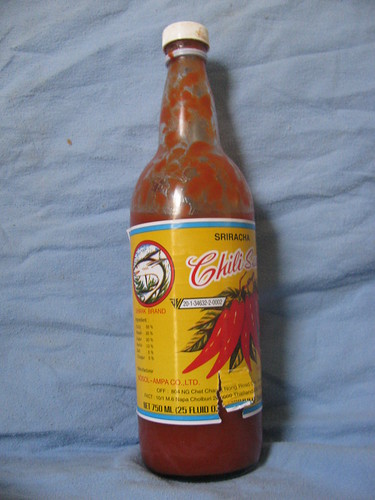 Note– the metal cap oddly did not seem to have any threads, so I replaced it with a plastic one.

Via Flickr:
Capture for Rob Ross at Rob’s Surf Report and his post What’s the big deal about Sriracha?

The "rooster" brand made and distributed by Huy Fong Foods is the sort of Sriracha most people are familiar with. I picked this up at one of our local Asian groceries. It’s runnier like Tabasco or other Latin-American style hot sauces; it doesn’t have a tomato puree base like the Huy Fong "rooster" brand. It still has that delicious red jalapeño flavor with a hint of sweetness.

I’m woefully behind on the photography challenges at the Daily Post.

The challenge two weeks ago just stumped me terribly.  Where was I going to find a photo of something abandoned?  To be honest, I wasn’t sure I had any.  I wasn’t sure if photos of our house (before we moved into it) would count, even though it had stood vacant for 1.5-2 years before we arrived (neighbor said 2 years, previous occupant said year and a half).

Then I remembered that a friend of mine (lydiafairy at Flickr) had some fantastic photos, any one that would fit this challenge perfectly.  Yesterday I got formal permission to share them:

You can totally post links to my images if you want to, Thank you for thinking them worthy of being seen 🙂

Anyways, here is one of my favorites, which was taken at a school closed and abandoned in 2001 (as best she remembers):

So many fascinating images.  I have a strong interest in urban exploration and I’ve looked into some really incredible stuff from around the world on this subject.  To those of your dear readers reading regularly I will try to dig up some of the stuff I’ve looked at if you so wish.  Please let me know, won’t you?  I find this subject so intriguing.

If you’d like to see more pictures like this, please visit my friend at Flickr and check out her neglected or forgotten photoset.  There are many wonderful photos–

There are some photos I can take, now that I think of it, and some more ideas I could share, but that will be another time.  Take care and thank you again for reading.

This is what I got done this past weekend.

I’m sorry the format isn’t better– I’m using Flickr’s existing share code to post this quickly, because I just don’t have the energy.

Via Flickr:
With the month of March comes preparation for spring, including getting the lawn and garden ready.

We had a mild winter this year, so I don’t think any delays (i.e., things normally done in the fall) should affect things too much.

Now and then, one of the daily prompts grabs my attention, even though I don’t follow them specifically.  (I prefer to draw from the Weekly Photo Challenges on the Daily Post.)  But Green Embers’ fictional story drew me right in.  His reference to 911 reminded me of when my son last called it on my behalf (apparently after learning about it at school).  I related the story to HuntMode on her Alert & Warning Center ~ Ever Wondered? post.

Ever have an experience that felt surreal, as though you’d been suddenly transported into the twilight zone, where time seemed to warp, perhaps slowing down or speeding up?

I would guess that for many people, mention of “the twilight zone” gets them thinking of Rod Serling‘s series of the same name.  But I think of this 1982 hit by Dutch rock band Golden Earring (NOTE: video is NSFW; skip this if a brief flash of side boob offends):

Surreal.  It comes from the word surrealism, or surréalisme in French, literally, “beyond realism”.  The Free Dictionary defines it thus:

A 20th-century literary and artistic movement that attempts to express the workings of the subconscious and is characterized by fantastic imagery and incongruous juxtaposition of subject matter.

Most notably, the Surrealists were inspired by dreams.

I am a day late to this prompt, but again, it seems like answering it was a natural course of action.  Only a day before, Steph Rogers wrote a post about a lucid dream she had.

This is a quick post but something I had to get out because I am feeling creeped out by it. Last night I was aware and conscious inside my own dream.  It was the strangest thing!

I don’t think she intended to respond to this prompt at all… but it fits, doesn’t it?  Several bloggers commented and assured her that lucid dreaming can be a great thing.

A composite image of my son sleeping with his DreamLight and my Uncle Fester face superimposed on the side, with some wizardry from the GIMP

But my dreams are bizarre, and not even in the cool way.

I can’t find the comment threads or the blogger that directed me to a Huffington Post article called Is This Why Some People Are Able To Remember Their Dreams Better Than Others? days before.  But I gathered that if I wasn’t sleeping well, I remembered dreams more.  I especially tended to remember dreams during naps.

Dreams can be part of the Hero’s Journey.  Please see Dreams and a Lack of Prozium: Supernatural Aid in my Equilibrium series for an example.

I’ve been in pain, and otherwise busy– it’s almost time for the next photo challenge!

If you’re following  jak & Cimmy’s Journal Jar, you’ll have already seen an example of three there back on Valentine’s Day/President’s Day weekend.  If you’re not– well, please have a look at How the Journal Jar REALLY celebrated V-Day.

Now, here are three more pictures I took at RadCon 6B:

These women were spinning thread in the hotel lobby.

There was always someone playing the piano set up in Wing 2 of the hotel.

which should give you a small idea of the things you could find at the convention.

We didn’t take a lot of photos and videos, but if you’d like to see more, please see our RadCon 6B 2014 photoset on Flickr.

Here’s another photo inspired by this week’s Photo Challenge at the Daily Post:

Our shadow box. I removed the glass temporarily to get a good shot without reflections

Please also see Weekly Photo Challenge: Treasure for more treasure involving Cimmorene as there is too much involving me here 😉

This is my wife, Cimmorene.

A selfie Cimmy took for her Loving Myself Through Gratitude blog.

Cimmy created this while working on the LDS Young Women Personal Progress program, to be ready to help our daughter when she does it.

As usual, this post was inspired by the Daily Post at WordPress.com for the Weekly Photo Challenge.

In today’s entry, I take the Monday Monster Mashup and mash it even further with the Weekly Writing Challenge!

As usual, comments are closed at the tao of jaklumen. If you aren’t already following us at Jak & Cimmy’s Journal Jar, why not do so now? Thanks! So come February, I decided I needed to make up for it.  I figured I would act early, and beat the Valentine’s Day rush.  On a whim, I stopped in to the local Just Roses flower shop, and asked for 12 white short-stemmed roses, in a vase.  They had such on hand.  Wow.  I told one of the florists, as she was ringing up my purchase, “If I do this right, she’ll…

Although I used this image for my Gravatar for a little while, I still feel a bit awkward sharing it, although I really wanted to show my Flickr followers that I was in so much pain to the point of tears– and this was during the summer.

Princess gets another shiner (eyes open)

Because I’ve shown my daughter’s photography before, I thought I’d add this gutsy selfie she took of herself.  Now Cimmorene had thought she’d doodled on her eye with a black marker, but I knew better.   I found her quietly crying in her bedroom a little while before, and she said she’d hit her head on her loft bed.  This is by no means her first black eye– after getting clocked in the face with a baseball bat wielded by a neighbor kid, she smiled for a photo that my father-in-law took… and then there were other accidents.  She’s my tough right-hand-girl, all right.

Candle in the window, a photo by jaklumen & family on Flickr.

I love you, my dear, every time I go

You have a way to let me know

No matter how upset I may be

I know when I return, I can always see

That signal waiting home for me

Welcoming me home with light so low

That sign so warm, that candle in the window.

A candle in the window like this always let me know that it was okay to come home, after an argument.