I don’t think I’ve ever mentioned this before, but I’m a big Depeche Mode fan.

There was a particular album cover that I just adored.  Granted, I’d gotten the image during the compact disc era, when gorgeous art that had covered vinyl LP jackets were shrunk to the jewel cases that CDs came in.  This image was for the single “Get The Balance Right“:

This song really resonated with me, and I figured that the Town & Country Planning’s design for the artwork was based on construction signs (especially as the single was released around the year “Construction Time Again” was an album).

So I did a lot of artwork based on the image.  I don’t think I’ve managed to save very much of it, but there was this: 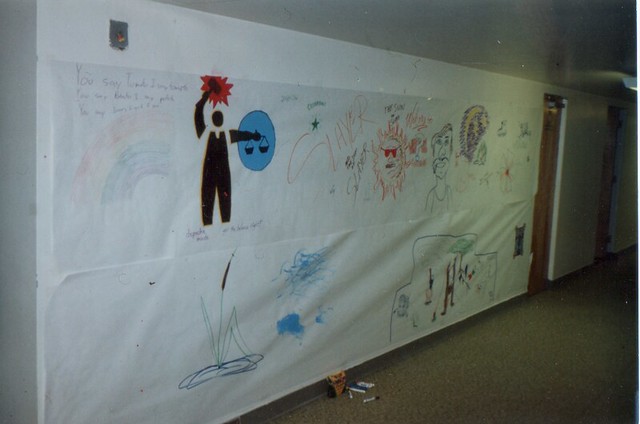 North Hall was a dormitory I stayed in, while attending Whitman College from 1994-1995.

Then I decided to recreate some of the images I’d made in 2010, as part of a card I sent to a pen pal Down Under:

Yep, that’s all freehand, and not digitally cleaned up.

And then just recently, I did some artwork for the #NoMoreShameProject/Trauma Recovery University (see Rachel Thompson reminds us that we are a Work In Progress):

which was largely modified from the standard US crossing traffic sign, because I wasn’t too sure if TC&P Associates’ designs were under copyright.

Then I found someone on RedBubble doing artwork based on DM album covers.  I figured if any attorneys connected to DM aren’t chasing after him, and the artwork is still up there, my own use and modification was fair game.  (Seriously, when I uploaded a snapshot of a homemade diorama my daughter made based on Plants vs. Zombies, made out of construction paper, that upload got taken down REAL fast.)

So I grabbed this image:

and then created this for #NoMoreShame/Trauma Recovery University:

And then, just today, I went and made a digital recreation of one of my original images.

One thought on “An Artist’s Journey: Get The Balance Right!”